With no one to call her own, Asha becomes her Family 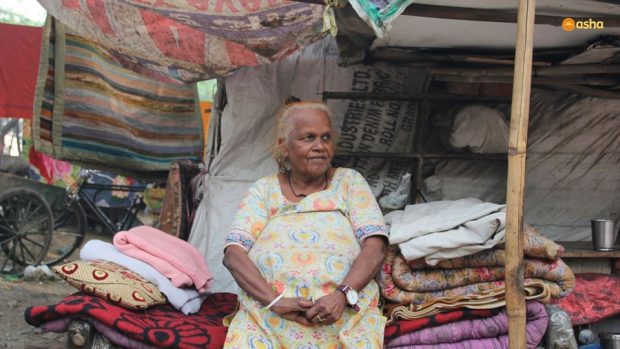 Rambuli’s parents were immigrants who settled in Delhi in the early 1940s. They started working as mill labourers, earning just Rs.15 a month (US$0.21/£0.17/AUS$0.31). This money was barely enough to feed this family of 16 and times were tough. Life worsened when Rambuli’s elder sister died during childbirth and Rambuli was married off to her widowed brother-in-law. She became stepmother to her sister’s two children at the age of 16.

Thankfully they had a good relationship. She recalls, ‘My husband was a good man and I had a happy marriage. Those were the best days of my life; we had enough of everything.’ Her husband was a truck driver who transported goods across India. He made Rs.150 a week (US$2.11/£1.72/AUS$3.08), which was good money in the 1970s. Rambuli soon became a mother to six children and life got busy. With her husband’s support, she got a job in a cinema box office. She worked a few days a week and earned Rs. 100 (US$1.41/£1.15/AU$2.05) per day.

However, from the year 2000, things took a turn for the worst. Rambuli’s youngest daughter became sick and died, age 11, tragically followed soon after by Rambuli’s husband, who suffered a fatal heart attack.

By 2005 life was too difficult, so Rambuli and her children moved to Chanderpuri slum colony, then a few years later her two eldest sons also died. Even more distressingly, her two remaining daughters and youngest son refused to take any responsibility for their ageing mother’s care. They were all married and decided that they had their own families to look after.

Distraught and helpless, Rambuli found herself living alone at the age of 75. She was homeless and living in the dirt. Her home included just a bed, a few water cans, utensils and a small stove. It was then that the Asha Community Health Volunteer (CHV) found her and learnt about her difficulties. The CHV took Rambuli to the hospital for a check-up, where she was diagnosed with diabetes and a minor heart problem, for which Asha gave her free medication – support which has continued.

These days, the Mahila Mandal (Women’s Group) regularly provides Rambuli with basic groceries. The Chanderpuri slum community also shows her the kind of generosity Asha values so highly. Her neighbours share meals with her every day and the whole slum community lovingly refers to her as ‘Amma’ (Mother). Rambuli visits the Asha centre every day and keeps herself busy interacting with the women and children.

Everyone’s kindness brings Rambuli to tears. She says, ‘I have no-one. Yet I have many community members who take care of me and give me food. My husband was a very charitable man and helped many helpless people. Maybe I’m getting blessed for his good deeds.’

To donate for the cause of Asha, click here: https://bit.ly/2tFvdy3

The Days of Extreme Hunger Haunts Me in My Dreams: Pooja (12)

Posted On 23rd April 2019 ~ 0 Comments
Skipping meals isn’t a piece of cake for anyone! In spite of having seen the days of hunger and absolute poverty at home, the 12-year-old…

Coping with Cancer Deepak finds the will to live

Posted On 4th December 2019 ~ 0 Comments
A resident of Savda slum, Deepak’s father migrated from Kanpur, Uttar Pradesh in the early 1990s. He got married and started living with his family…

Posted On 4th August 2020 ~ 0 Comments
17 year old Shabnam has been living in Zakhira slum colony all her life. Her father moved to Delhi from Bihar 20 years ago in…