A Mother’s fight against malnutrition 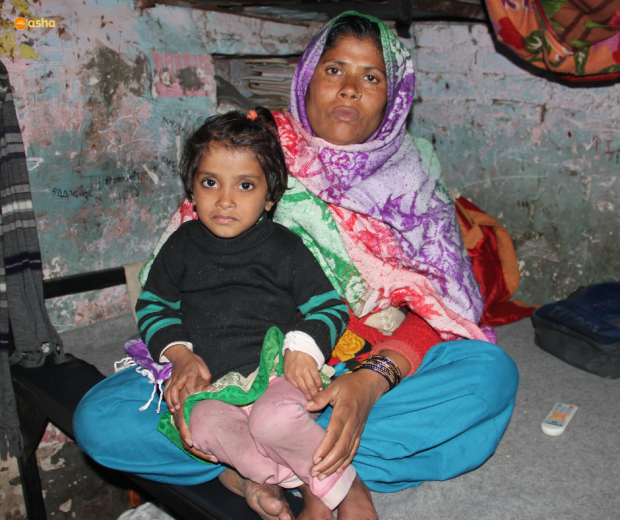 Born in Darbhanga, Bihar, to a family of farmers, Israt was born and brought up in her ancestral village in the 1980s. Deprived of education and basic needs from a young age, Israt and her siblings spent their childhood assisting their parents in a small farm growing rice and potatoes. Her family sustained themselves by selling rice and potatoes seasonally, earning bare minimum to survive on.

In 2001, Israt’s marriage was arranged to 19-year-old Mohammed when she was barely 18. Israt gave birth to a girl in 2005 and occupied herself in motherhood. A year later, she shifted with her husband to New Delhi and settled in Zakhira slum, West Delhi. She soon got associated with Asha when Asha’s team members were encouraging women to join the women’s group within the slum.

Over the years, Israt gave birth to 2 more children, a boy in 2008 and a girl in 2011. As per Asha’s counselling and guidance both her children were born healthy and delivered in government hospitals nearby. However, when her fourth child Rajeeka was born, things were different. When she was pregnant, complications cropped up as she could not get herself checked regularly at her village. Israt had to return back to Delhi as advised by the village doctor.

Rajeeka was born prematurely at just 6.5 months weighing only 800 gm. Considering the critical situation, the doctors were not sure if the baby would survive. The baby was kept for 1.5 months on a ventilator to observe her progress. Israt was highly emotional and distressed during this period. Asha’s team members were present physically and emotionally with her during every step of this turmoil.

Initially, Rajeeka was too weak, she had to be spoon-fed and her recovery was very slow. She was prescribed liquid medicines of calcium and iron that were fed to her every day at the Asha centre. As Rajeeka grew, she became active and had a good appetite like any growing child. However, with so many mouths to feed Israt and her husband were not able to provide her a nutritious diet.

When Zakhira’s Mahila Mandal (Women’s Group) members heard of Rajeeka’s poor health and her family’s financial circumstances, they collectively decided to donate money to buy eggs and milk for her. Despite the Women’s Group members themselves coming from difficult and poor families, they all contributed a little each to make sure that little Rajeeka gets healthier.

‘The Doctor says she needs a good diet. My husband earns Rs.15000 (210.84 USD or 162.6 £) a month and it’s not a stable job. This is not enough to feed 6 members in the family. I am thankful to the Mahila Mandal members (Women’s Group) who contribute monthly for Rajeeka. With the donated money, I buy eggs and milk for her daily.’ Says a teary-eyed Israt.

As of today, all of Israt’s children are active members of the Bal Mandal (Children’s Group) who participate in all activities held in the Zakhira centre. Rajeeka is currently healthy however her weight is still unstable and fluctuates. Asha is keeping a keen watch on her growth and weight and working towards improving the same.

To donate for the cause of Asha, click here: https://bit.ly/2tFvdy3

Asha team practice the Asha value ‘Compassion’ in the slums

Posted On 14th October 2020 ~ 0 Comments
Dr Kiran: "I had an exciting Zoom call with over 350 Asha team members and volunteers a couple of days back. Everyone was enthused and…

Posted On 4th August 2020 ~ 0 Comments
17 year old Shabnam has been living in Zakhira slum colony all her life. Her father moved to Delhi from Bihar 20 years ago in…