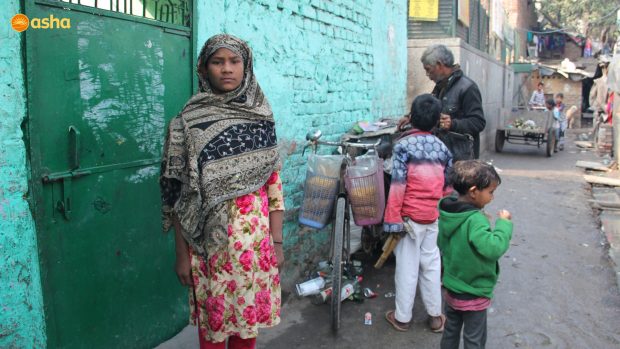 A sudden bout of chest cramp and cough shook up little Fatima one midnight last year when the family was vacationing in their home town (Bihar). The frightened 12-year-old girl, trying to hide the pain from her elders, decided to gulp it down. But the intense pain along with a cough knocked back. This time, she couldn’t resist but express it in front of the elders.

Her parents, slum dwellers of Asha’s Zakhira slum community, took her to a local doctor there in Bihar.

She kept on taking the prescribed medicines, but it never seemed to help. Since her condition didn’t improve, the parents decided to bring her back to Delhi.

Due to the social stigma attached to TB, Fatima couldn’t go out of her shanty and was also asked to shun mingling with her friends around.

No one was aware of her condition.

Ms Shiny (a Team Leader at Asha’s Zakhira slum community) used to inquire about Fatima from her friends every day but never received a satisfactory response. “Fatima has always been a very sincere and punctual child. I first took it as absenteeism but listening to the stories cooking around by her neighbours, I got worried,” said Ms Shiny.

One day, she decided to pay a surprise visit to Fatima’s shanty only to found out a weak Fatima, who was suffering from whooping cough, lying on one corner. Doubting for Tuberculosis (TB), Ms Shiny took her to a nearby Government Hospital of Moti Nagar (Delhi) where she was diagnosed with the same disease.

Fatima’s family burst into tears after listening about her as years ago, the elder daughter of the house was also diagnosed with the disease that took their happiness forever. Her sister’s fiancée broke the engagement as the news of her sickness broke out.

But this time, Fatima’s extended family- Asha helped her survive; helped her gather courage. She got motivation and enthusiasm to live her life fully. Initially, the Community Health Volunteer used to come to her to feed medicines but soon she started recovering and began coming to the Asha’s Dots centre every day.

Presently, Fatima has almost recovered from the disease and has started attending school regularly.

Be a helping hand for the Asha slum dwellers, donate today: https://bit.ly/2tFvdy3

Asha and International Day for the Elderly

Posted On 5th October 2012 ~ 0 Comments
Many elderly in the slums are neglected by their families and forced to live alone without anyone to look after them. Having toiled hard for…

Posted On 13th February 2016 ~ 0 Comments
One of the most recent areas where Asha has started working is the new Seelampur ‪‎slum colony, located on the banks of river Yamuna. Amidst…

Posted On 15th May 2015 ~ 0 Comments
On 14 May, 2015 Dr Kiran inaugurated Asha’s Physiotherapy unit at Ekta Vihar slum colony. It was a joyous evening with the Mahila Mandal members…