Know Tushar’s story in his own words 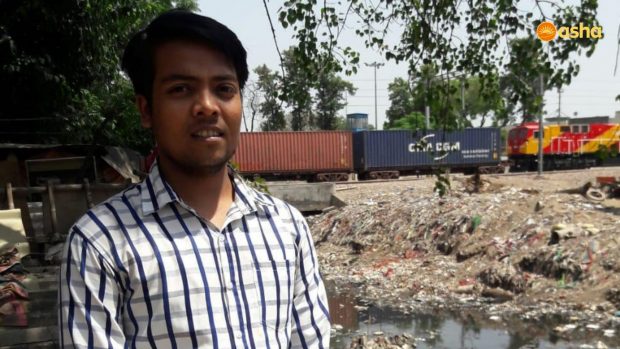 “I was born in great poverty to parents who lived in a slum by the railway track. My father was a labourer doing low paid work at Asia’s largest scrapyard, breaking down old cars or machines with crude tools and implements, and earning barely 75 pounds in a month. The biggest tragedy is that after 14 years of being a labourer, he has suddenly lost his job because the scrapyard has been declared illegal by the courts. And we are once again facing huge financial challenges. I work as a sweeper in a small shop and give tuitions to the children in my slum after college hours, to bring a bit of money home. There’s a huge scarcity of water in my community and I have to wake up early morning each day to fill up enough water from the common water connection and carry it home in buckets.

My father and I have had a stressful relationship because his sleep is disturbed when I study at night as we all live in one room. I have to read under the dim light of a small lamp in one corner of the room.

I can never forget the day when I was playing an Indian street game called Gilli Danda when a young Asha Ambassador called Abhishek approached me. That meeting changed my life. I had never heard of Asha until then. Abhishek took me to the Asha Centre and introduced me to Tressy Ma’am and many other kinds and loving members of the Asha family. The books I had always dreamed of buying but could not, were provided by Asha, and I was thrilled! Now I could study well and also in the peace and quiet of the centre. The senior Ambassadors helped me, coached me, and mentored me. I could hardly believe it when I scored 88.6% in my high school national exam. I had never thought my eyes would ever witness such marks and grades. I also topped my school in the humanities subjects. I was able to secure admission in a History Honors Program at Delhi University; this was my dream course, and I was in! The first student from my entire village and community to go to university! And Asha, of course, understood my financial difficulties and paid for my tuition and other expenses without which I would have become a labourer like my father.

When I interned at the British High Commission through Asha, and entered the beautiful office on the first day, I wondered if I was daydreaming. It was an experience I don’t have enough words to describe. 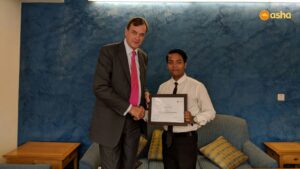 Tushar with Sir Dominic Asquith KCMG, who is the British High Commissioner to India

I have now decided that I would like to do a Masters in History of Art as the architecture of the ancient monuments in Delhi has always fascinated me. Maybe I will become a Historian or a Museologist some day. I pray that I can move with my family into my own home someday and give them a life of dignity.

I love being an Asha Ambassador and spreading the Asha values that have completely changed my life and made me a better person I think.

I may forget many people and incidents in life, but I can never forget Dr Kiran and will always love her as my mother. 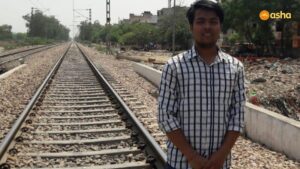 Here I am, Tushar, a poor boy who played barefooted in the dirty lanes by the railway track, didn’t have enough to eat, and today I have nearly completed my Bachelors in History Honors with a GPA of 7.5/10, studying away until the early hours of the morning as the trains go by on the railway track every few minutes.

Thank you to all the Asha friends who have changed the lives of the students of Mayapuri slums. We will always remain grateful to you and pray that God will give you a long, healthy and happy life.”

Posted On 17th July 2018 ~ 0 Comments
Asha’s High School student Zubair from Seelampur has emerged as a winner in his recent examination. This 17-year old ‘s dedication is exemplary. Coming from…

Posted On 21st June 2018 ~ 0 Comments
“Education means a lot in everyone’s life as it facilitates our knowledge and skills. It completely changes our personality and helps us remain optimistic'', shares…

Reaching for the sky with Asha’s support

Posted On 22nd August 2020 ~ 0 Comments
Hazmat is an 18-year-old Asha student who resides in Peeragarhi slum, West Delhi. Hazmat’s Father is handicapped from his right hand since birth and does…