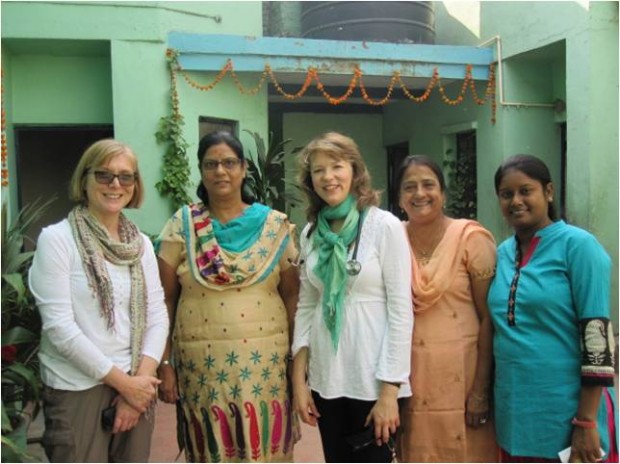 It was with great pleasure and a sense of privilege that I was able to return to Delhi and carry out general medical and rheumatology clinics in several of the Asha slums over the duration of a week. On this occasion Dr Kate Milne accompanied me. Kate is a longstanding friend and a GP who qualified from the same medical school in London as I did all those years ago. It was wonderful to be able to discuss medical cases with each other in order to optimize the care we were aiming to provide and to share the experiences. 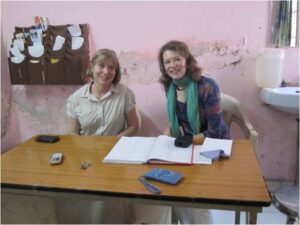 We attended to both the young and the elderly and saw many general medical cases, such as chest and ear infections, mechanical knee and back pain and nutritional problems and we also carried out a few antenatal checks. 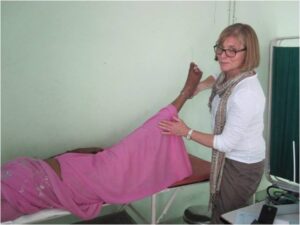 The following picture demonstrates a classical case of using clinical skills, as this 21 year old lady who basically looked well was complaining of left sided loin pain.  Examination of her spine revealed a very likely tuberculous abscess which, if not picked up and referred to the Government hospital, would continue to expand and eventually lead to destruction of the spine. Asha has a wonderful system whereby the health volunteers for each slum ensure that the lengthy course of anti-tuberculous drug treatment is adhered to by the international DOTS system. This means that drug compliance is high, a cure is more likely and drug resistance is kept to a minimum globally. 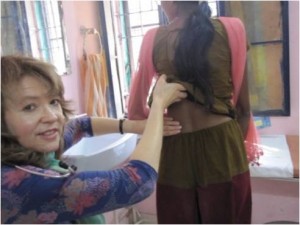 One of the common nutritional deficiencies in the slums is a lack of vitamin D: which is easy to treat providing it can be diagnosed in time. We were able to prescribe supplements of this vitamin through the Asha clinics. If left untreated the deficiency can lead to soft bendy bones which become deformed. The picture below is an example of rickets which is the name given to vitamin D deficiency in childhood. 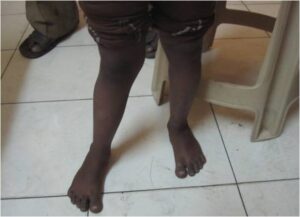 In my mind, there does seem to be an increase in some of the so called ‘Western’ diseases within the dwellers of the slums. Hypertension is one example. Another is sugar diabetes and possibly this is a reflection of dietary changes even amongst the slums with an inclination towards the less healthy eating habits found in a western diet; thus making individuals prone to diabetes through these external influences alongside genetic tendencies. Dietary education is important ironically, even in the face of dire abject poverty. In addition, Kate and I were able to prescribe drugs such as metformin for type 2 diabetes and we knew that the excellent health care volunteers in the slums would continue to monitor specific cases and had the wherewithal to check blood and urine glucose levels. 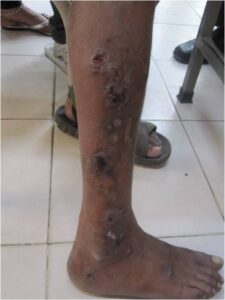 We also saw an eclectic mixture of skin diseases which varied from infections such as scabies or staphylococcal lesions, to scalds and burns made prone because of open cooking pots filled with boiling water, to a case of a lady with atrophic and ulcerated fingers because of lack of sensory awareness: probably due to a rather unusual neurological condition. The medical supplies available in the Asha slum clinics were perfectly sufficient in treating the common problems. Occasionally I sought advice from my dermatology colleagues in the UK which I did by sending a photograph of a skin problem via email. This was very useful indeed!

There was an article in The British Journal of Medicine on the 12th October 2013 explaining that the Government of India is committed to the global goal of ‘Health for all as a human right’ with an approximate aim to complete this goal by 2020. The article is worthwhile reading and it is indeed good that health for the poor: both urban and rural, is being tackled. However, 2020 is a long way off and in the meantime Kate and I both hope that our service as medical volunteers may have offered some help in some small way. 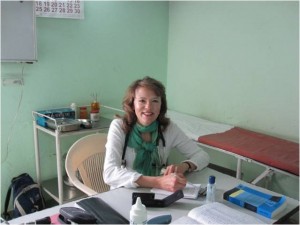 Despite abject poverty, and I do think that there is something worse about urban poverty compared with rural  poverty, this is simply because one cannot escape from it. Yet, I am always struck by the kindness and seemingly relative contentedness of those people living in the slums touched by the hope which Asha brings.

I know that Kate and I enjoyed our time in the slums and we hope we have contributed something to the people living in them. We felt totally supported by the hardworking team of volunteers and staff who always offered us such outstretched and welcoming hands.

Posted On 12th September 2018 ~ 0 Comments
Life took violent turns when 26-year-old Kavita lost her eyesight. The poverty-stricken Kavita was married to a widower who lives in Mayapuri slum community with two daughters.…

Asha team practice the Asha value ‘Compassion’ in the slums

Posted On 14th October 2020 ~ 0 Comments
Dr Kiran: "I had an exciting Zoom call with over 350 Asha team members and volunteers a couple of days back. Everyone was enthused and…

Posted On 20th February 2014 ~ 0 Comments
A team led by Gwen Montgomery from Ireland visited Mayapuri slum colony in the third week of February. They decorated the walls of the children’s…