Sapna nourished her child through Asha’s counselling and support 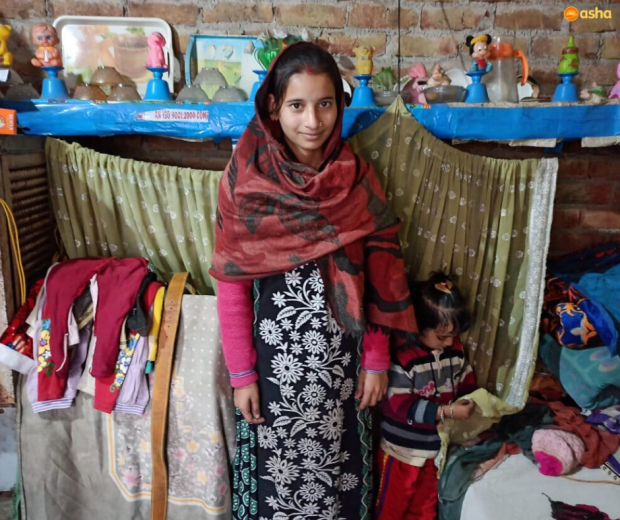 Born in Paharganj, Central Delhi in the year 1997, Sapna was the third child from a total of 7 siblings. Her parents were migrants from the city of Rampur in Uttar Pradesh. Sapna remembers her childhood as poverty-stricken with her father working as a rickshaw driver and her mother working in a factory. They barely earned Rs.500 (7.04 USD or 5.41 £) a month combined. Poor income meant that Sapna and her siblings never had enough to eat and slept on empty stomachs on most nights.

Sapna studied till the 6th standard in a nearby government school, however, she lost interest in her studies soon. She left school and stayed at home to assist her mother with the household chores. Sapna became a second mother to her siblings, she learnt to cook and clean, and helped her family. At the young age of 18, she fell in love with Hari Shankar aged 25 who lived in her neighbourhood. They were married soon and shifted to the slum community in East of Delhi.

Hari Shankar started working in a plywood factory nearby earning a decent sum of Rs.12000 (168.91 USD or 129.78 £) a month. While Sapna stayed at home and took care of the home and her in-laws. Soon, Sapna got pregnant and gave birth to a baby girl in the year 2006. However, the baby was born premature and underweight, weighing lesser than 2.5 kgs. During this time, Asha got associated with Sapna as they were keeping a track on new mothers within the slum community.

Unfortunately, complications with their baby girl started since she was 2 days old. Their child was diagnosed with fever initially which was on and off. At 2 months old, she was struck with pneumonia and jaundice simultaneously. This was a traumatic period for young parents who were distressed and unaware of treatments for such illnesses. The Asha CHV provided them guidance and nutrition counselling along with assisting them to all their hospital visits. The child was taken to private hospitals nearby and thousands of rupees were spent on her recovery. This put Sapna and Hari in huge debts with their near and dear ones.

With time, their daughter recovered but she continued falling sick every now and then. Asha assisted by providing calcium and iron supplements for their child. Sapna and Hari faced greater concerns as their daughter grew older but never spoke a word. A visit to the ENT assured them that she would start speaking soon. Finally, after 2 years, their daughter started speaking and they were relieved.

‘The Asha team has been like a family member these past few years. I am thankful for their constant support and guidance’, says Sapna with tears in her eyes. Today, Sapna and Hari’s child is a talkative young girl who is happy and healthy. They look forward to sending her to school very soon.

To donate for slum dwellers such as Sapna living in the slums, click here: https://bit.ly/2tFvdy3

Posted On 24th June 2020 ~ 0 Comments
In the midst of the pandemic, Asha students are studying at their homes and Asha centres to prepare for their online exams. Asha team members…

Posted On 14th March 2018 ~ 0 Comments
It was supposed to be one of the happiest moments in her life, but Phulwati was instead left devastated after her dreams of having…

Posted On 31st March 2020 ~ 0 Comments
''Asha Corona Warriors working with the police to help people keep distance as they wait in line for food grain subsidies from the government.''- Dr…