Shahjahan created her own path to success 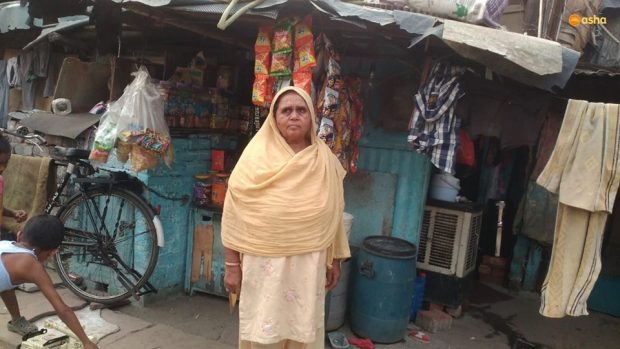 60 years Shahjahan hails from a small village in Uttar Pradesh. She was born to a very poor family and her father married her off in 1975 when she was just 15 years old. After marriage, Shahjahan shifted to her husband’ s little shanty in the Mayapuri slum community. Abdul Wahid, Shahjahan’s husband was a factory worker and earned hardly INR 150 ($2/ £2) per month.

Within 10 years, Shahjahan was blessed with 6 boys and 2 girls. Having a big family, Shahjahan and Abdul found it very difficult to feed the children and run a house smoothly.

One day, Shahjahan remembers in the year 1998, a young lady in crisp cotton saree knocked the broken door of her shanty and introduced herself as Thressi. Thressi told Shahjahan about Asha and encouraged her to join the women group. Shahjahan was very reluctant at first as she found it to be a waste of time, but later she found that women in her neighbourhood had started attending the meeting very regularly. She decided to give it a try and came to attend a weekly meeting. From that day to date Shahjahan has not missed a single meeting of women’s group.

At present, Shahjahan runs the grocery store with the help of her son. Her Husband, unfortunately, died 5 years ago.
Now Shahjahan has advised all young women to become educated and independent so that they can face any harsh realities of life.

To donate for people from the slum such as Shahjahan, click here: https://bit.ly/2tFvdy3

Journey of Harshit in the words of Dr Kiran

Posted On 29th April 2019 ~ 0 Comments
Harshit and Harsh are twins, sons of a poor family living in Chanderpuri slum colony. Their father came to the city out of desperation when…

Posted On 17th February 2020 ~ 0 Comments
We wish Asha student Abhishek, the first beneficiary of the 'Sydney Scholars India Equity Scholarship' all the very best for his future as he beings…

An empowered woman helps to empower other women