When you empower a Woman, you transform a Community 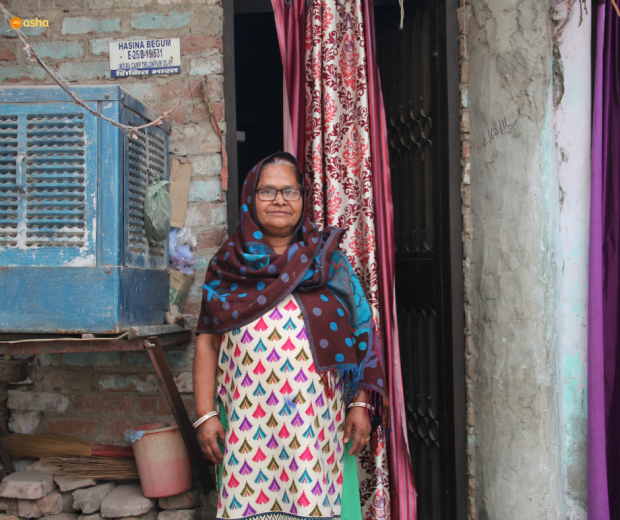 There are narrow lanes and dusty roads that you will tread on before reaching Haseena’s house in Trilokpuri slum, East Delhi. On arrival, you will see a gated door that leads to a tiny house made up of bricks. One that could easily be described as a matchbox. Haseena’s matchbox home consists of a kitchen filled with amenities that stand on the left with her bed on the right. 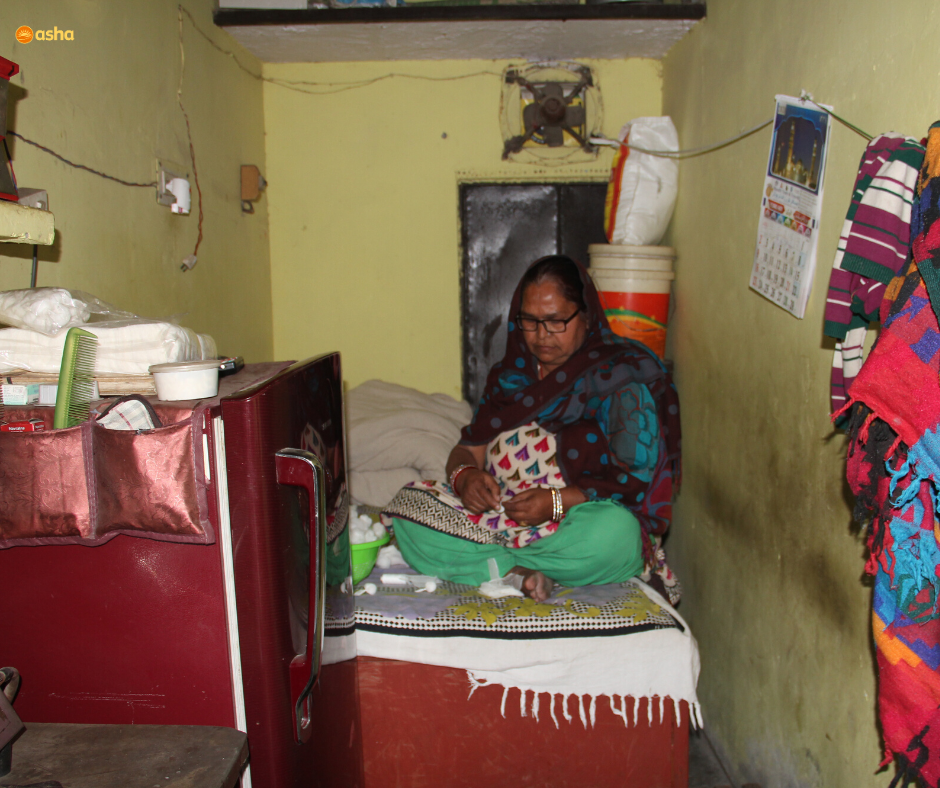 Haseena is a 65 year-old-woman who originally hailed from the state of Uttar Pradesh. She had a happy childhood as the only child in her family. Her parents were poor and worked on the farms. At the young age of 17, Haseena’s marriage was arranged to Saleem aged 21. Alas, it was an unhappy marriage as her husband was physically abusive and continuously beat her. After 10 years of torture and abuse, Haseena took a stand and finally left her abusive husband for good.

At the age of 27, Haseena chose to move to Delhi to start fresh. She settled down in Trilokpuri slum in the 1990s, a time when everyone lived in shanties made up of plastics and wood. At such a time, Asha entered the slum and helped the slum dwellers by providing access to free healthcare. Initially, Haseena was associated with Asha as she started visiting the doctor on call for her backache issues. With time she joined the Mahila Mandal (Women’s Association) and became a core member of the group.

On the personal front, Haseena met Haseen Miya, they fell in love and got married. Haseen Miya was a good man who worked as a carpenter however he was an alcoholic. In time, this got the best of him as he was diagnosed with throat cancer. He tragically passed away 1 year later. Haseena was left with her 8-year-old daughter Heena to provide for. At such times of need, Asha helped Haseena by providing her with the job of a Community Health Volunteer (CHV).

Haseena worked as a CHV for 19 years, enlightening slum dwellers about health issues such as Tuberculosis, AIDS, Malnutrition, Reproductive care, etc. She was instrumental in assisting the elderly to hospitals and assisting in late-night deliveries for the slum community members and their families. ‘’ I never feel alone despite my troubles, my Asha family is always there. This is my only family, the whole of Asha team and the Women’s group members. Dr Kiran has been so kind to me, she helped me get my daughter married, I will never forget that as long as I live’ said a teary-eyed Haseena.

Since her departure from the role of a CHV from Asha, Haseena has taken up the vital role as the ‘President’ of the Women’s Association. She now keeps herself busy with addressing issues related to water, electricity, toilets, roads, drains, etc. within the slum to the government officials in her constituency. Haseena along with the members of the Women’s Association make sure such issues are highlighted and resolved soon.

To donate for women living in the slums such as Haseena, click here: https://bit.ly/2tFvdy3

Posted On 11th April 2020 ~ 0 Comments
''The Asha Corona Warriors through their daily commitment and sacrifice, have built trust and earned the respect of the communities they serve. Through their cheerful…

Posted On 9th October 2019 ~ 0 Comments
Soon I will have the knowledge, skills, and confidence to care for all types of people" says second-year Asha’s nursing student. “I always had a…

Women from slum communities meet with their MLA