Arti: Asha team members selflessly work for people like me. 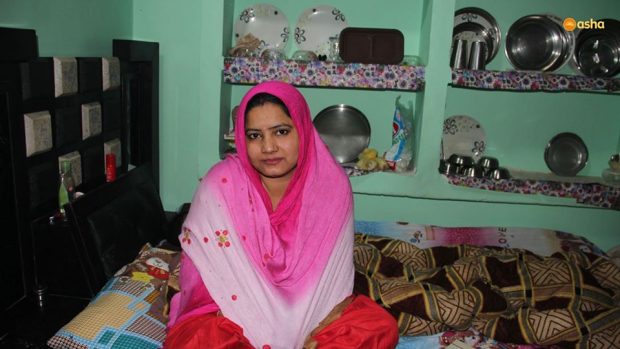 Arti ‘s parents were migrants from the state of Uttar Pradesh, who settled in the Tigri slum community during the early 1990s. Arti’s childhood was filled with despair as her mother suffered from mental health issues. Her father was employed in the government sector as a cleaner, he made a meagre earning of Rs.400 (5.62 USD or 4.33 £) a month. His job kept him busy and he was unable to provide undivided attention to his wife and family.

Unfortunately, one day when Arti was 10 years old, her mother was cooking and the stove burst, she suffered 60 percent burns and succumbed to her injuries. As the eldest child, she had to grow up overnight to take responsibility. She became a second mother to her younger siblings and learned to cook, clean and nurture for them. Arti’s father made sure she went to school. However, after class 8, she discontinued school, like household chores and tutoring her siblings became bigger responsibilities. When she was 17 years old, she fell in love with a 20-year-old man in her neighbourhood and got married.

In the year 2013, Arti was filled with joy as she came to know she was expecting. Her mother-in-law was overjoyed and got some protein powder from a godman to keep the baby healthy. A few weeks later, Arti was in pain and went to visit the doctor. The doctor conducted a few tests and diagnosed that her baby would be born deformed. He suggested an abortion. She was in absolute shock. With a heavy heart, Arti and her husband decided to go ahead with the abortion, as they felt they were left with no other choice.

After suffering from this traumatic experience, Arti was hesitant to become a mother again. The Asha team met her during this period and took her under their wings. Arti joined the Mahila Mandal (Women’s Group) and attended the meetings regularly which made her gain knowledge about women’s rights and women’s health. She slowly gained confidence and was expecting again. Asha counselled Arti during her pregnancy and provided her with the right diet guidance. She visited the Asha centre weekly to check her weight and blood pressure. When Arti was unable to visit, the Asha team made sure that they visited her and checked her personally.

Arti gave birth to her baby girl in 2016. Unfortunately, she was born underweight, weighing under 2 kilos. Things took a turn for the worse when the child suffered pneumonia at 4 months. It was a difficult period as her child was hospitalised. It took 2 months for her daughter to recover. The Asha team provided moral support as well as free iron and calcium medicines to make her baby healthy. Over the years, Asha continued to monitor her baby’s health and weight with check-ups and free liquid medicines provided at the Asha slum centre.

‘Asha team members selflessly work all day, walking around the slum helping people like me. They have given me so much information about government health schemes along with counselling and guidance regarding all matters’, says Arti. Today, Arti’s child is of 3 years and healthy. However, her weight is still unstable and fluctuates. Asha continues to monitor her daughter’s health and weight along with providing nutrition counselling.

To donate for women living in the slums such as Arti, click here: https://bit.ly/2tFvdy3

Relief provided to the disabled in Asha communities

Posted On 27th April 2020 ~ 0 Comments
''Hi folks, today’s update is about the hundreds of disabled persons in the Asha communities. The lines to collect cooked food provided by the government…

Posted On 10th March 2016 ~ 0 Comments
This International Women's Day, here is an acknowledgement to the wonderful efforts of some of the women from Asha communities. Their diligence and a strong…

Posted On 5th April 2018 ~ 0 Comments
Sushma, a young mother of two daughters from Trilokpuri slum community works as a helper at different houses to support the family. Her husband, an…